On Sunday, October 5, 2003, I walked a block from my hotel in Washington, D.C. to St. Matthew’s Cathedral on Rhode Island Avenue. A 10 a.m. service was scheduled at the church, where the Red Mass would be celebrated–a service held prior to the beginning of a new session of the U.S. Supreme Court, which the Supreme Court justices normally attend. 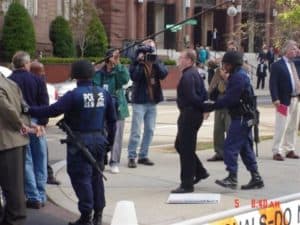 Daniel Sparks is arrested by federal marshals for holding a Ten Commandments sign.

I was walking with two ladies with whom I had been travelling on the Spirit of Montgomery Save the Commandments caravan from Montgomery, Alabama to Washington, D.C. When we approached the block where St. Matthew’s is located, we crossed the street behind police barricades that had been set up to block vehicle traffic on the street immediately in front of the church. Police officers told us to walk up the sidewalk nearest the church, which we did. There was a police line on the edge of the sidewalk on the far side of the street from the church.

We arrived in front of the church within a few seconds and I greeted a pastor who had been travelling with us. He stated that he was going in the church for the service but that others of our group were down at the far end of the sidewalk, outside of the police line, and that the police would not let them come inside the line if they were carrying signs with the Ten Commandments printed on them.

After speaking to the man with the flag, I walked a few steps down the sidewalk to where the media personnel were located. I stood a few feet from them, observing the crowd. Two of my fellow Alabama citizens, Matt and Alicia Carden, who had been travelling with the caravan, walked up and stood beside me and we began talking. At that time, the Rev. Patrick Mahoney, one of the caravan organizers, walked up and stood immediately beside the television crews. He was holding a sign with the Ten Commandments printed on it. The Cardens and I walked over and stood beside the Rev. Mahoney.

The Rev. Mahoney immediately turned around, ducked under the police tape, and walked down the same sidewalk toward the area where he had previously been standing. He stopped about twenty feet away from the previous point and stood with the Ten Commandments sign. Mr. Carden then went over to the police line and took a Ten Commandments sign from one of the people there. He then came over and stood beside the Rev. Mahoney. The federal marshals grasped the Rev. Mahoney’s hand and handcuffed him, causing him to drop his sign. They also seized Mr. Carden, causing him to drop his sign near one of the police cars. Mrs. Carden picked up the sign that the Rev. Mahoney had dropped. The marshals seized Mrs. Carden, causing her to drop the sign. The Rev. Mahoney called to Troy Newman, another member of our group, to take pictures of the arrests.

Seeing that the Ten Commandments sign was lying on the street, being trampled by the boots of federal marshals wearing tactical equipment and carrying assault rifles, I reached down and picked up the sign. I held the sign above my head. During this time, the marshals were handcuffing the Cardens. One of the marshals pointed toward me and said three or four times, “We need to get this one.” After the Rev. Mahoney and the Cardens had been handcuffed and lined up against the rear of one of the police cars, one of the marshals approached me. The marshal said, “Sir, put down the sign.” I replied, “No, sir.” He then grasped my left arm and twisted it behind my back, then grasped my right arm, doing the same, which caused me to drop the sign. He then handcuffed me and pushed me against the side of police car, next to the others who had been arrested.

The marshals then had us sit down on the curb, with our feet in the street. Mr. Newman, who was standing approximately ten feet or more away from the officers and us, was approached by one of the officers, who seized him. Another officer took Mr. Newman’s camera and handcuffed him. The marshals had Mr. Newman sit on the curb beside us.

The Rev. Donald Ely, another of our group, came from inside the church, where he had been sitting, waiting for the service to begin. He walked over to us and stood, asking what was going on. The marshals told the Rev. Ely to go outside of the police line. He stated that he wanted to stand there with us. The marshals again told him to go outside of the line, that they did not want to arrest him because he had done nothing wrong. The Rev. Ely affirmed that he had done nothing wrong and insisted that the others of us had done nothing wrong, either. He asked the marshals what we had done wrong. They refused to answer him and, when he refused to walk away, they handcuffed him and had him sit on the curb beside us.

The Washington, D.C. Metropolitan Police were present but were not involved in the arrests. The marshals had us placed in police cars belonging to the Metro Police. We were eventually taken to the Second District Headquarters station of the Metro Police. We were required to remove our belts, shoelaces, watches, rings, necklaces, and everything from our pockets. The five men were placed in a large holding cell and Mrs. Carden was placed in a small female holding cell. After approximately one hour, a marshal dressed in business attire came to speak to us. He stated that he had been called out of his church service to come process us. He collected our names and other information. A few minutes later, the same marshal came back to verify some additional information. This time, two other marshals who were in uniform accompanied him.

After we furnished the information to the marshals, we continued to wait in the cell. After several hours, the first marshal returned. He told us that we could each pay $300 each and we would be released. We would have to return the next morning for a hearing to set a trial date. Based on previous experience, the Rev. Mahoney and Mr. Newman stated that this was not appropriate. They insisted that the Washington, D.C. “post and forfeit” arrangement should apply in this incident. The marshal left us. He returned a few minutes later and stated that we could each pay $100 as a post and forfeit and we would be free to leave. The Rev. Mahoney insisted that this was not the usual fine. He also requested that he be released on his own recognizance and have his day in court. The marshal again left and returned a few minutes later. This time, the marshal stated that we were being charged with crossing a police line and that we could each pay $25 post and forfeit and we would be released. We agreed to this, with the exception of the Rev. Mahoney. The Rev. Mahoney and Mr. Newman informed the rest of us that the usual post and forfeit amount is $50.

We were each photographed and fingerprinted. The Rev. Mahoney was allowed to speak to someone over the telephone in order to provide the information necessary for his release. The rest of us were then required to pay our $25 fine. Then, each of us was required to give our thumbprints on paperwork. Shortly thereafter, we were each let out of the cell, given our belongings, and released. We walked around the building and entered the front of the police station, where we called for someone to pick us up.

It is also important to note that the executive branch of our federal government has the power to enforce laws; in other words, these federal marshals who arrested us are under the direct jurisdiction of the president. On Monday, October 6, I spoke in person about this abuse of power with Mr. H. Goodloe Sutton, Jr., a staff member of U.S. Senator Richard Shelby (R-Alabama), and Ms. Jenny Bottegal DiJames, a staff member of U.S. Representative Bud Cramer (D-Alabama). Both seemed concerned about this issue, but gave no indication as to how the congressmen might respond.

The above information is a true and correct representation of the events described.