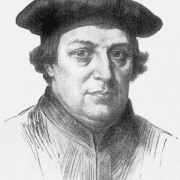 From Table-Talk (“Of Marriage and Celibacy”).

….. But neither God’s ordinance, nor the gracious presence of children, the fruit of matrimony, moves the ungodly world, which beholds only the temporal difficulties and troubles of matrimony, but sees not the great treasure that is hid therein. …. Let the contemners and rejecters of matrimony go hang … who recognise not marriage, but live all together like animals … [DCCXX.]

….. None, indeed, should be compelled to marry; the matter should be left to each man’s conscience, for bride-love may not be forced. God has said: “It is not good that the man should be alone;” and St. Paul compares the church to a spouse, or bride and a bridegroom. …. [DCCXXI.]

….. A woman is, or at least should be, a friendly, courteous, and merry companion in life, whence they are named, by the Holy Ghost, house-honours, the honour and ornament of the house, and inclined to tenderness, for thereunto are they chiefly created, to bear children, and be the pleasure, joy, and solace of their husbands. [DCCXXVI.]

There is no greater plague in this life than a morose and unchaste wife. Solomon says, that to be married to a woman one dislikes, is the worst of calamities. [DCCXXIX.]

‘Tis a grand thing for a married pair to live in perfect union, but the devil rarely permits this. When they are apart, they cannot endure the separation, and when they are together, they cannot endure the always seeing one another. …. Married people must assiduously pray against these assaults of the devil. I have seen marriages where, at first, husband and wife seemed as though they would eat one another up: in six months they have separated in mutual disgust. ‘Tis the devil inspires this evanescent ardour, in order to divert the parties from prayer. [DCCXXXII.]

He who has an old, spiteful, quarrelsome, sickly wife, may fairly reckon himself in purgatory. [DCCXL.]